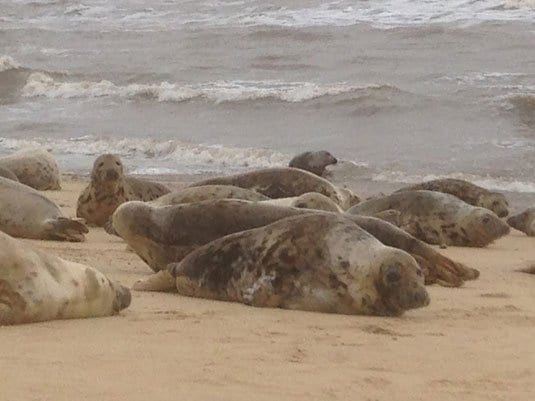 Travel blogger Jules Brown travels to where the wild things are – Norfolk seal beach and spends the night in shipshape YHA Wells-Next-the-Sea.

Middle of winter. I’m standing on a freezing cold Norfolk seal beach. Grey waves are breaking on the shore and a biting wind is whistling through the rough grass in the rolling dunes behind.

So far, so bleak. Ordinarily, on a day like this, I’d be thinking, Beach? You must be joking.

But Horsey,  has a very particular attraction, a famous Norfolk seal beach. In fact, to be fair, there are hundreds of attractions – ranged as far as the eye can see along the wind-whipped sands. Grey seals, scores and scores of them, flopping in and out of the waves, basking on the sand and sheltering by the rocks.

Roughly half the world’s population of grey seals congregates in UK waters, and a huge proportion of those come to Horsey between November and February to give birth ashore to their pups. So this Norfolk seal beach is one of the world’s best places, and the long beach attracts sightseers all winter – even on the foulest of days, of which this is very definitely one.

They’re wild animals, of course, so getting too close isn’t a great idea, especially as the females are extremely protective of their white-coated pups and the male seals, the bulls, fight for territory and mates. But there’s plenty of space on the beach for everyone, and viewing zones established at certain places, so if you’ve got a decent camera it’s easy to get some great photos and video.

I spent around an hour on the beach and shot some video footage, which I used for Seal Beach, the launch video for my Jules Told Me YouTube channel.

A couple of tips to keep safe. Don’t take photos or selfies with the seals – that’s just asking for trouble and possible danger and it disturbs the seals, who may abandon or crush their pups. And dogs are best left at home or, at the very least, kept on a short fixed lead.

We warmed up in the excellent Nelson’s Head pub, about ten minutes’ walk back from the beach – roaring fire, home-cooked food and loads of real ales and ciders – before heading off to YHA Wells-Next-the-Sea for the night, 40-odd miles or so up the North Norfolk coast.

We had a great private room at the toasty-warm YHA, tucked up tight in a cosy space that resembled a ship’s cabin. It’s a nicely restored old building – formerly the church hall for St Nicholas Church, opposite – and is just ten minutes’ walk from the harbour, where we watched the boats unloading shellfish in the early morning.

Wells’ terraced fishermen’s cottages are decorated with embedded shells and maritime door-knockers, while a brisk walk out along the Norfolk Coast Path quickly takes you into the estuary’s glistening waters and mud-flats, with wheeling seabirds a constant companion.

Winter in Wells, and seals too – a brilliant combination.

Rough Guides and Cool Places writer Jules Brown blogs about travel and travel-writing at Jules Told Me. Check out the Seal Beach video on his YouTube channel.