At the top of Northumberland National Park, the Cheviot Hills hug the North Eastern Scottish border, taking in views over the North Sea. The Cheviots are characterised by rolling moorland peaks intersected by verdant, winding valleys and are home to ancient forts and herds of feral, horned goats.  Athena Mellor and her partner, photographer David Harvey went on a 15km hike to discover more about this wild corner of British countryside.

Being the highest peak in Northumberland National Park at 815m, it felt only natural that we would attempt to summit the Cheviot on a cold but dry day. Yet the closer time drew to our planned 15km hike in the Harthope Valley of Northumberland, the more temperamental the weather forecast appeared. But for my partner Harvey and I, the draw of the wild is almost always victorious over any imperfect weather forecast, so we laced on our boots, threw our rucksacks over our shoulders filled with a few extra layers and copious amounts of trail snacks, and headed into Northumberland’s higher hills regardless.

As someone who spends a lot of time exploring wild places around the UK, I have spent a very short amount of time in Northumberland National Park. It was somewhere I saw as being rugged, mysterious and filled with history, and a part of the UK of which I was eager to explore more. Home to England’s cleanest rivers, clearest air and darkest skies, Northumberland is a nature lover’s paradise; somewhere with endless opportunities to hike, swim, climb and explore. Being so close to the Scottish border, I imagine that many people bypass Northumberland National Park in favour of the Scottish mountains, meaning it is also one of the least visited and least populated National Parks in the country. But for me that is just another reason to visit, with the hope of having the hills all to ourselves, as we did on this day.

Our day began at YHA The Sill at Hadrian’s Wall where we had stayed the night. The Youth Hostel is a striking building, with a beautiful living roof that is designed to reflect and blend in with the surrounding landscape. We also took the opportunity to wander down to the famous Sycamore Gap at Hadrian’s Wall at dusk the night before, so Harvey could live out his childhood (and adulthood) dream of visiting the site made famous by the 1990s classic, ‘Robin Hood: Prince of Thieves’. 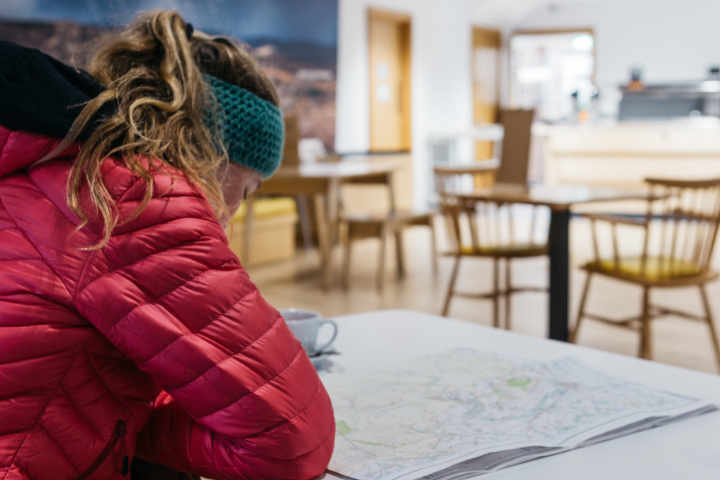 After a hearty breakfast and a few cups of coffee to fuel the day ahead, we hit the road for the starting point of our walk — the Harthope Valley, another 60 miles north into the National Park. I chose this valley for our walk as it is the site of Northumberland’s two highest peaks, and I am someone who loves to gain height to really get to know an area in which I wander. Yet as we approached the valley, we could see clouds clinging to the higher peaks and I was fairly confident that there would be no 800m views on this day, but all in all the hills were clear and in that moment I was overwhelmingly pleased that we had stuck to our original plan.

Ascending from Harthope Burn, views soon began to open onto the surrounding hills and valleys; a blanket of textures and colours, without another soul in sight. Soon we arrived at Housey Crags, a prominent rock formation amidst a landscape of rounded peaks. The tor, formed of Hornfells, offers views across to the Cheviot herself – still obscured by cloud – and over the meandering burn in the valley below.

Our Ordnance Survey map showed sites of a few ancient settlements near to Housey Crags and Long Crags. We probably spent much longer than we should have exploring Housey Crag and its neighbouring Long Crags. With the sun beaming between clouds and views wide and vast, it was difficult to draw ourselves back onto the footpath for the steep ascent to our first peak of the day. 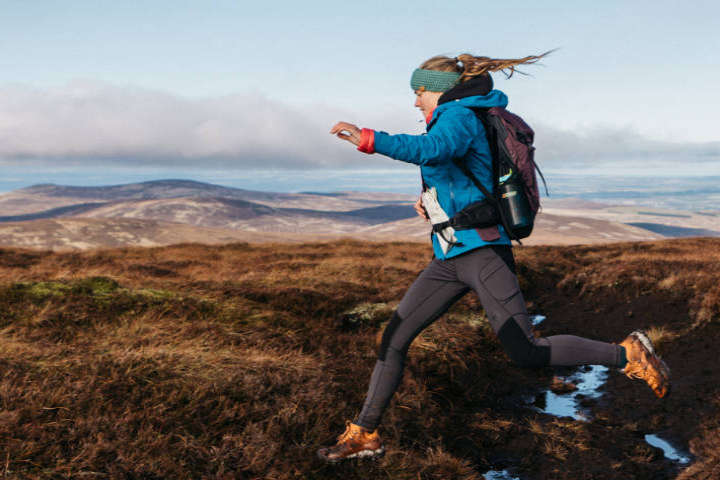 At 715m, Hedgehope Hill is the second-highest mountain in the Northumberland National Park and the climb to its rounded peak is a steep but rewarding one. A few hundred metres from the summit, we disappeared into a thick white cloud and watched the colourful valley be concealed by an ever-deepening fog. From Hedgehope Hill, the trail stretched further into the hills while the domed figure of the Cheviot remained hidden under a foggy hat, rolling rapidly down the mountainside. I always love the mystery of what lies beneath the fog, knowing that soon I will be rambling into it and my perspective will shift entirely.

Home schooling during lockdown? Looking for inspiration to help keep young minds active and entertained? Our free activity pack is bursting with things for kids to make, learn and do.Crafts, recipes, wildlife facts and more – everything you need for a YHA adventure...

END_OF_DOCUMENT_TOKEN_TO_BE_REPLACED

By Anita Kerwin-Nye Director of Strategy & Engagement at YHA Home schooling is hard. Super hard. Even harder than before. Darkness doesn’t help. But also, we seemed to have fewer expectations last time – now government ‘expects’ three to four hours of home...

END_OF_DOCUMENT_TOKEN_TO_BE_REPLACED

Caleb was appointed to the Board at YHA's 2020 AGM. He is the youngest Trustee in the organisation's 90-year history. Caleb is an experienced safeguarding and child protection officer. He supports children and young people with their mental health, wellbeing and...

END_OF_DOCUMENT_TOKEN_TO_BE_REPLACED

Activities Discovering the Northumberland’s Cheviot Hills
Our website uses cookies so that you get a great service. Continue to use the site as normal if you're happy with this, or find out why we use cookies.Ok